You are here: Home1 / Events2 / The Colored Museum: Past/Present/Future Exhibition3 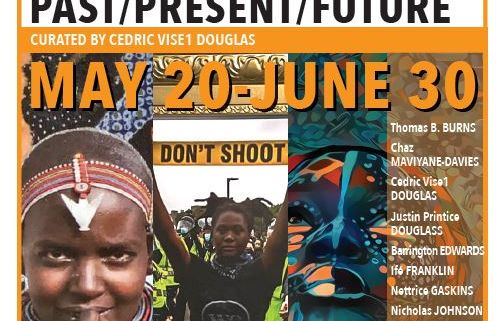 In a bold new exhibition at The Umbrella Arts Center in Concord, noted artist and curator Cedric Vise1 Douglas has found inspiration in a provocative work of theater, George C. Wolfe’s satirical play, The Colored Museum, to create a visual journey of the Black Past, Present and Future.

Free and open to the public the exhibition echoes, responds to, and challenges themes of the play, produced May 20 – June 5 by The Umbrella’s professional stage company, directed by Pascale Florestal. Wolfe’s play undermines Black stereotypes over time, and challenges notions of museums and white spectatorship of Black experience, through employing incisive and often hilarious satire.

Inspired by the play and conversations with Florestal, Douglas selected these artists not only on their strengths as artists, scholars and public speakers, but as activists whose combined work represent a call to action for audiences to personally promote social change and dismantling of racism in their communities. The organizing framework creates dialogue among the Past, from slavery, the civil rights and back to Africa movements; the Present demands for personal and political change in the wake of George Floyd; and Afrofuturist projections of race, technology, and Black bodies viewed through positive lenses. The exhibition also features an audience interaction component that allows visitors to leave messages, have conversations in regard to race relations, and reimagine museums and cultural institutions themselves.